Have you heard the news?

695 Prospect Point Road North is up FOR SALE!

Are you looking for a large home for a big family or in-law situation? Welcome to 695 Prospect Point Road in Ridgeway, Ontario. This spacious bi-level offers almost 4000 square feet of bright living. Large windows on all floors, take in the fantastic views of the yard. This home offers 4+ bedrooms and 3 bathrooms. A recreation room that us 40 feet long which could be divided. Many well thought out designs and must be seen to be appreciated. Although you may not see this from the road, this home has a large 30×25 attached garage. Newer roof shingles and central air. All rooms are large. Basement ceilings are also very high. If you are looking for privacy with in-town services, this is the place for you!

Call Ray Rosettani today at 905-651-3279 for your private showing. Visit www.SellingFortErie.com for more details on this property. 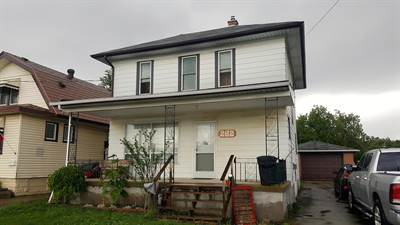 Welcome to 262 Lewis. This 4 bedroom 2 story home has had some recent updating in the kitchen & dining room however there is still some cosmetic work to be completed. The homeowner is selling this home “as is” which will allow the new buyer to complete this home as they wish. There is a detached 1.5 brick/block garage. Enjoy the comfort and privacy of being seconds from the Niagara River. Welcome to 2651 McAffee Street. Home has clear views of the Niagara River. This comfortable bungalow offers 2 bedrooms, spacious & bright living room with fireplace, open kitchen & huge laundry room with tons of storage. There is nothing left for you to do, except relax and enjoy!

If you are wondering if Fort Erie is a great place to retire, the answer is YES! There is so many options for people retiring in our great town.
Here is a breakdown of some of Fort Erie’s living options.
Niagara Gated Communities
Fort Erie, Ontario offers many adult and gated communities in the Niagara Region. Fort Erie is home to Ridgeway by the Lake, Point Abino, Black Creek Leisure Homes and Crystal Beach Tennis and Yacht Club. See below for additional information on each community:
Ridgeway by the Lake
Ridgeway by th

e Lake is located in Ridgeway, Ontario, close to the US border, QEW, Niagara Falls and hours to urban city centres such as; Toronto, Burlington, Hamilton. Ridgeway by the Lake is an adult lifestyle community along the shores of Lake Erie. The community was designed for the people that like the resort style living with a 9,000 square foot clubhouse, low maintenance & breathtaking homes ranging in price. Residents can choose from several single family detached homes or townhomes. Contact Ray Rosettani at 905-651-3279 or visit SellingFortErie.com to view homes for sale in Ridgeway by the Lake.
Point Abino Gated Community

Point Abino is a special gem in the Fort Erie real estate market, making these properties very desirable. The homes within the gates of Point Abino are beautiful and one of a kind. The gated community offers residents with a sense of security, a very tranquil place to live and a sense of community, where friendships come easy.
Point Abino is also home to the “Point Abino Lighthouse.” Thelighthouse was built in 1918 and is still one of Fort Erie’s attractions with tour dates in the summer months (www.palps.ca) Residents of the Point Abino gated community have the chance to see this all year round since it is located behind the gates.  Also, located seconds from the community is the Bertie Boating Club (www.bertieboating.com). For those who have a boat and want to spend the summer months on the water, why not dock it seconds from your home?
Visit SellingFortErie.com or contact Ray Rosettani to see homes for sale in Point Abino.

A very popular gated community in the Niagara Region is the Crystal Beach Tennis and Yacht Club. The community is a beach comm

unity with detached single homes located on the site of the former Crystal Beach Amusement Park. The community not only offers breathtaking homes but tennis courts, playground, clubhouse, exercise facilities & beach access. Crystal Beach is well known for its long stretches of sandy beaches, quaint community and rich history where the world famous, Crystal Beach Amusement Park, use to bring in people from all over the world.
Check out the gated community for yourself, contact Ray Rosettani or visit SellingFortErie.com to see what is available.
Black Creek Leisure Homes

Are you in the market for an adult living community, then Black Creek Leisure Homes in Stevensville, Ontario is just the place for you. Black Creek Leisure Homes has both the country setting of living with an urban location. The com
munity is close to highway access and 10 minutes to Niagara Falls, as well as 10 minutes to the US Border.
The residents have access to security gates restricting who comes in and out of the park, a 12,000 square foot recreation centre with heated indoor swimming pool, indoor spa and saunas, locker rooms, library, hobby room, great hall,kitchen, games room, 2 tennis courts, 2 horseshoe pits and so much more.  Additional features include: municipal services, professional management, snow removal and curbside garage.
There are many of resale mobile homes in the park ranging from $60,000 to $200,000, visit Ray Rosettani or SellingFortErie.com to set up an appointment to see all your options and to see if this is the right place for you! Fresh on the market is 865 Dominion Road in Fort Erie, Ontario.

Enjoy living in this large family home nestled on huge 66’ x 503’ lot with tons of privacy. Home is located in ideal location, close to the water, walking trails and beach. Also minutes from all in-town amenities and highway access to QEW and Peace Bridge. Interior of the home features: 4 bedrooms, 3 bathrooms, huge master bedroom has ensuite bathroom with Jacuzzi tub and sliding doors leading to back yard. Fully finished basement with walkout, large recreation room with gas fireplace, 2 bedrooms and tons of space for everyone. Home also features detached 1.5 car garage.

For more information on this listing or other listings, please visit www.SellingFortErie.com or contact me directly at 905-651-3279. Looking to invest your money? Why not check out 328 Ridge Road North in Ridgeway, Ontario. This large 4900 square foot building is home to 7 units, 6 residential and 1 commercial unit.

Great investment property on corner lot in Downtown Ridgeway. This property offers 7 units, 6 are residential units and 1 is currently being used as a pizza parlour in the 1200 square foot commercial unit on the main floor. Don’t miss out on this amazing business opportunity. Please contact Listing Agent for more details about rents. Gross Rental income of $51,000. The owner of the building also owns the pizza shop and is willing to stay on as a tenant for the new buyer. The business is also for sale for $125,000 including all chattels, name and goodwill.

Contact Ray Rosettani from RE/MAX Niagara Realty Ltd., Brokerage at 905-651-3279 or visit SellingFortErie,comm for more information on this and many more listings.

Mortgage rates are on the rise… What does this mean to you as a Home Owner?

The Bank of Canada has announced that the interest rate of 0.5 per cent will now be increased to 0.75 per cent.

Are you someone who has a mortgage or hoping to get one soon? Global News helps break it down for you and how this increase will affect a current or upcoming mortgage.

First Global News explain the different types of mortgages and how to distinguish what you may have or are in the market for.

Lenders don’t always mirror the BoC exactly. For example, the last time the central bank made a move, in July 2015, it cut rates by 0.25 of a percentage point, but mortgage lenders cut variable-rate mortgages by only 0.15 of a percentage point. “With an increase, however, it’s most likely the full amount will be passed along to consumers,” said to James Laird, co-founder of RateHub.ca and president of CanWise Financial. This is the working assumption of this calculator.

For highly anticipated interest rate changes, such as today’s hike, lenders generally adjust their variable rates within hours of the Bank of Canada announcement, said Laird. Variable-rate mortgage holders, in other words, will likely be affected immediately.

Fixed-rate mortgages: Most Canadians have fixed-rate mortgages with interest rates that hold steady through the length of the loan term. If that’s you, you can still use this calculator to get an idea of how your payments might change once your mortgage is up for renewal. However, keep in mind that if you have a five-year mortgage that will be up for renewal soon, today’s rates might still be lower than the rate you locked into five years ago.

Prospective Home Buyers: If you’ve been eyeing a certain fixed mortgage rate over the past few weeks, today’s interest rate increase might not affect you. Most fixed-rates have already increased in anticipation of today’s hike, which was largely anticipated by markets. In all likelihood, the rates you’ve been seeing lately are the rates you’ll be able to access in the next little while. However, you can still use the calculator to see what your monthly payments might look like if you were to get a mortgage after the Bank of Canada raises rates again, which might happen as soon as this fall.

If you have a variable-rate mortgage

Some 30 per cent of Canadians have a mortgage with a so-called variable-rate, which moves up or down along with the general level of interest rates in the economy. If the The Bank of Canada raises rates, homeowners with variable-rate mortgages will see their monthly mortgage payments go up.

If you have a fixed-rate mortgage

Over 65 per cent of Canadians have fixed-rate mortgages, which, as the name implies, remain fixed through the term of the loan. Here’s what these homeowners need to know:

If you’re about to get a new mortgage

If you’re house-hunting right now, keep in mind the following:

*Information was used from http://globalnews.ca/news/3581766/mortgage-calculator-canada-interest-rate-hike/

Meticulously kept 3 bedroom bungalow with full finished basement is located only a short walk to Downtown Ridgeway. Home is situated on large 175′ deep lot. Enjoy your morning coffee on the covered front porch.

Visit goo.gl/3eQ7tb for more information on this great listing!

Selling your home is one of the biggest and most important decisions in your lifetime. The SellingFortErie team has more than 80+ years of knowledge in the Real Estate industry. Our team consists of 4 full time Realtors and a full time team assistant. We are very passionate about our jobs and this can be seen in our sales and our return customers.

Here is what the SellingFortErie team does differently, that sets us apart from other Realtors in the Niagara Region:

With that being said, if you list with the SellingFortErie team you will not only have 1 agent working for you but a team behind that agent, making sure every buyer lead will not go unnoticed and ensure a quick response to those leads, because Customer Service is what we do.  Our whole team is proud to call Niagara our home and we look forward to SELLING everyone on it too!